skip to main | skip to sidebar

Earlier this year, I was invited to write an introduction to the Catasetinae by the editor of the Scottish Orchid Society Annual Bulletin for 2010.  The Bulletin was published this fall and with the permission of the Bulletin, I have decided to add the text and pictures to my blog.  This article was written for people who may have never grown the Catasetinae so I have tried to include the basic information about the subtribe and its culture.  My thanks to the editor, Isobyl la Croix and the Publisher Chris Barker.  If you are interested in the Society, the website is http://www.scottishorchid.info/.
INTRODUCTION TO THE CATASETINAE

G.F. Carr
THE GENERA AND SPECIES
For the past 18 years I have enjoyed an interest in and fascination with the subtribe Catasetinae. Although the Kew researchers have recently proposed to transfer two genera, Galeandra and Grobya, from the sister subtribe Cyrtopodiinae to the Catasetinae, this article deals only with the five core members of the Catasetinae, Catasetum, Clowesia, Cycnoches, Dressleria and Mormodes. First I want to introduce the readers to these genera. I think that the conditions of growing in Scotland might be conducive to cultivation of the Catasetinae because four of the five genera go into dormancy in the winter months after they reach maturity and have bloomed. In this condition, they do not need light, water or warm temperatures until they initiate new growth. Just don’t let the temperatures drop below 5˚C. I will discuss this in more detail later in the section about culture.
There are several unique features that separate these five genera from the rest of the Orchidaceae. Two of the members, Cycnoches and Catasetum have separate male and female flowers, unlike the other orchids which unite the male (pollen) and female (stigma) elements in the column. The separation of the sexes usually is called dimorphism from the Greek for two forms, although both Cycnoches and Catasetum occasionally produce intermediate hermaphroditic flowers and therefore polymorphism might be a more correct term. I would like to start with these two.

The genus Cycnoches consists of 34 species divided into two sections. The inflorescences originate from the upper nodes of the mature pseudobulbs and are pendent. The lip of the flowers, both male and female, in the genus is uppermost. When a genus is subdivided, current rules of nomenclature stipulate that the section containing the type species of the genus take the name of the genus. The Cycnoches type species is Cycnoches loddigesii.  Tab 1 shows two male flowers and Tab 2 is a female flower of the species.
The male flowers have a long, slender, curving column with the pollen at the tip. This feature gave the genus its name from the Greek for swan + neck. The female flower has a short, broad, column with the stigma located on the inner surface of the column near the tip.
Section Cycnoches consists of eight species whose male and female flowers are quite similar except for the difference in the structure of the column as illustrated the pictures of the type species, Cycnoches loddigesii.
The second section with 26 species is named Heteranthae from the Greek for different, because of the completely different form of the male and female flowers.  I have chosen Cycnoches egertonianum, one of the most confused and important species, to represent the group.


The other dimorphic genus is Catasetum. Thereare some 180 species and natural hybrids of Catasetum divided into two subgenera and a number of sections and lesser subdivisions.  New species and natural hybrids are described frequently, so the number grows.  Like Cycnoches, the female flowers of all Catasetum species are very similar and so, as with Cycnoches, the identification of the species is based on male flowers.  In most cases, it is impossible to determine the correct species of a Catasetum unless the male flowers are seen.  The male flowers of Catasetum species may be divided

into groups in several ways.  In traditional taxonomy the antennae size
and position are used, but there are two other ways which are useful
horticulturally.  The first is the orientation of the lip - the smaller group
has male flowers with the lip uppermost, as illustrated with the type
species Catasetum macrocarpum [tab. 5].

The larger group has male flowers with the lip lowermost, illustrated by Catasetum pileatum, one of the most widely cultivated members of the genus [tab. 6]. 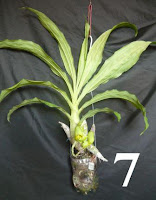 Another way to separate the species of Catasetum horticulturally is based on when the inflorescence develops.  Catasetum macrocarpum [tab. 7]represents the group which initiates inflorescences with the developing pseudobulb.  The flowers on the plant shown are female.  The larger group bloom from the mature pseudobulbs as shown in tab. 8 of male flowers Catasetum arietinum. 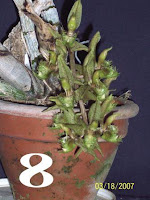 The inflorescences of Catasetum develop from the base of the pseudobulb and their position may range from pendent, through arching to erect, although the weight of the flowers and buds may cause even the species whose inflorescences originate as erect to arch. 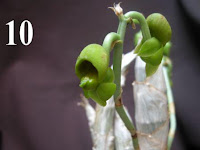 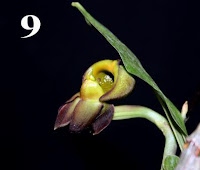 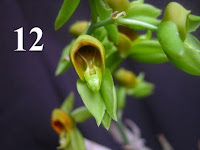 The release of the pollen is triggered by the pollinator Euglossine bee touching the antennae which extend from under the anther cap on the column in most species of the genus, as illustrated on a male Ctsm. macrocarpum [tab. 13].
Two other genera in the subtribe, Clowesia and Dressleria have bisexual or “perfect” flowers with the male and female elements united in the column. This is the same arrangement as found in the rest of the orchid family. However these two genera are protandrous, which means that the pollen must be removed before the stigma is receptive to fertilization. Species in both these genera were considered as part of the genus Catasetum until 1975 when Dr. Calaway Dodson published his conclusions that the genus Catasetum should be reserved only for the species with dimorphic flowers. He proposed that the species with hermaphroditic flowers should be separated and placed either in the resurrected genus Clowesia, or in a new genus named Dressleria. Here are some of the key differences that he used to divide the hermaphroditic species into two genera.

Dressleria inflorescences develop with the new growth and are sturdy and erect, although they may arch with weight of the buds and flowers. The lip is uppermost with the column adnate to or embedded in the basal section of the lip. There are 10 published species in the genus. Their culture is somewhat different from the other genera in the subtribe. Dressleria eburnea (tab. 14) and Dressleria dilecta (tab. 15) illustrate this genus. The pollinia are released when the anther cap is displaced from the column by the pollinator bee on inserting its head into the opening in the lip in the process of collecting fragrance crystals.

Clowesia inflorescences are pendent.  When grown in containers, the inflorescences extend straight out from the base across the media until reaching the edge of the container and then grow downward.  Some species develop inflorescences with the new growth, some from leafless, mature pseudobulbs.  Clowesia are the smallest of the five genera, with seven published species.   The lip of all the species of the genus is uppermost and free from the column, and the pollen is ejected when pressure is applied to the stipe by the pollinator bee.  The genus is represented in this paper by  Clowesia rosea (tab. 16), the type species of the genus, 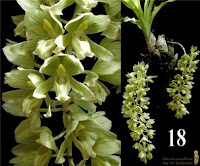 Cl. dodsoniana (tab. 17) and Cl. russelliana (tab. 18) which also illustrates one of the most rewarding feature of the genus, the generally high flower count produced by well-grown clones of the species.
The fifth member of the subtribe, Mormodes, is perhaps the strangest of all, in keeping with its name derived from the Greek for phantom or frightful object.  The name was given by John Lindley because of the strange, twisted flowers, which make the genus the only member of the Orchidaceae that is not bilaterally symmetrical.  Over the years, study of the genus has revealed that although the flowers of the genus are generally hermaphroditic or “perfect”, some of the species produce different sexual forms –  generally referred to as extreme female, extreme male and intermediate hermaphroditic or what could be call normal (for this genus at least) as shown here. 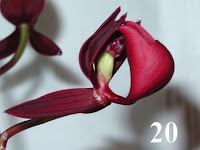 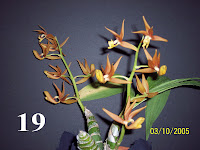 Tab. 19 of Mormodes warscewiczii shows the extreme male form distally with the extreme female form on the lower portion of the inflorescences.  Tab. 20 is a red, intermediate sexual form of the species.
The hermaphroditic forms of the species of Mormodes, like the species of Clowesia and Dressleria, are protandrous. Pollen is released by pressure on a finger-like thread that extends from under the anther cap and lies on the lip. The orientation of the inflorescences and that of the flowers on the inflorescence varies among the some 70 species of the genus. Taxonomically, the genus is divided into two sections, the smaller group blooms with the developing pseudobulbs and the larger group blooms on the mature pseudobulbs. Inflorescences develop from the middle or lower middle nodes of the pseudobulbs. Identification of Mormodes species is largely based on the shape of the lip, which may have to be flattened to bring out the differences. There are several different basic forms. Mormodes warscewiczii represents the group with a three-lobed lip. 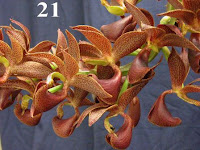 In some species of Mormodes, after the pollen is removed, the originally twisted column untwists and rises up to expose the stigma more easily to pollination. This is referred to as the female position. This is illustrated by Mormodes tigrina ‘McHatton/Young’ (tab. 21) in a picture from the owners. One can see that the column of some flowers still remains twisted on the lip and of others raised. The flower holds an Award of Merit from the American Orchid Society.
CULTURE

• During growth, give them good light, (so-called “cattleya” conditions) or higher

• Keep them well watered, don’t let them dry out when in growth but when the pseudobulbs mature and buds develop, decrease the watering and be careful not to get water into the flowers. That could trigger the ejection of the pollen or harm the flowers. At that point I recommend pot-watering rather than spraying

• Heavy fertilization when in growth. I recommend potting the plants with short-term (6-9 months) time-release pellets (such as Nutricote or Osmocote) in the medium and fortnightly applications of more or less balanced formula urea-free fertilizer while they are in growth. With copious water, light and air movement, I believe it is impossible to over fertilize.

These conditions apply to Dressleria in general, with two exceptions. Dressleria do not lose their leaves annually nor do they go dormant. They also prefer cooler and more humid conditions year around.

There are several South American vendors who travel to shows in the UK and Europe. If you cannot find plants available from local suppliers, here are four with whom I have dealt that you may wish to contact. There are a number of other reputable South American dealers but I don’t know their schedules. If you are interested in additional names, you may contact me.

ILLUSTRATIONS FOR INTRODUCTION TO THE CATASETINAE